EdleFest regulars, The Dicemen deliver a heady mix of folk, post-punk and indie genres from their acoustic trio. “Drawing on the greatest traditions of the protest song, but with a generous sprinkling of folk-punk irreverence” – David Dee Moore, Blues & Roots Radio 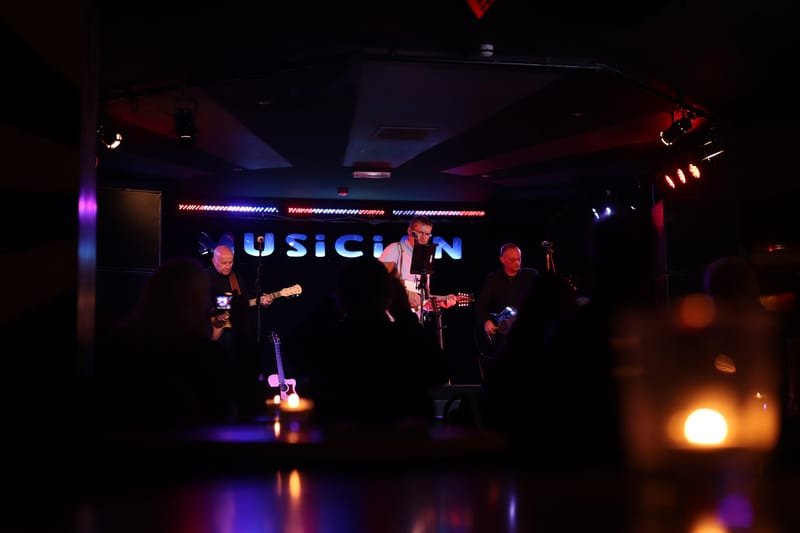 Legend has it The Dicemen were formed after losing a bet. Admittedly they were long odds - but The Dicemen placed their bet on the demand for an acoustic folk/punk/indie trio in the North Watford area... and so with one fateful roll of the dice, the Dicemen were formed from the very essence of post-punk, indie and folk genres. They have been gambling on their success ever since. Their original material offers a rare insight into what it means to be nearly human, and their covers range from Tom Waits to Talking Heads.

(The bet has yet to be settled)

"Wow thank you for the cover…..nice work" - Chris Difford (Squeeze)

“Drawing on the greatest traditions of the protest song, but with a generous sprinkling of folk-punk irreverence” – David Dee Moore, Blues & Roots Radio

“If you enjoy it as much as I do… buy tickets” – Jane Clayton, West Norfolk Radio

“It’s a great single… great, I love that” – Chris Denerley, Beyond Radio

“A unique musical tableau – how do we follow that?” – David Chamberlain, Acoustic Routes

Their title song from their debut album, Last Throw of the Dice, appears to be about an aging band who still think they have something to offer, despite their lack of commercial success. The Dicemen categorically deny all allegations that this song is in any way autobiographical. The Dicemen's new single - 2020 Vision - is out and available on Spotify or for download at all good on-line music retailers!

The Dicemen will also be appearing this summer at The Magpies festival in York and The Ragged Bear Festival in Nuneaton. They have also taken the stage at Watford Live, The Musician in Leicester, Stroud’s Lower Street Festival, and a number of local music venues from Thame’s FTMC to The Goat in Berkhamsted.